Now, in a PR update, Sega has officially revealed the new character 'Sage' - who we got a brief look at towards the end of the latest trailer. According to Sega's description, Sage is a mysterious girl who appears across the Starfall Islands, and throughout the story cautions Sonic to leave the area despite his mission to save his friends.

In the same update, Sega has also provided a closer look at some of Starfall Islands' enemies. These are "strange creatures" Sonic hasn't previously encountered, and require players to make full use of the all-new battle system and abilities.

"This enemy spawns in groups and attacks in jabbing motions with both hands."

"A floating enemy causing damage with attacks that appear as electric tornados."

"A wheel-like enemy that rushes towards Sonic once he is detected and attacks at high speeds if provoked."

"An enemy protected by a hard shell that attacks at a distance with a boomerang-type move. Sonic’s attacks cannot penetrate the hard shell, but other methods such as Cyloop can catch this enemy off-guard."

"An enemy formed by a group of spheres that attacks Sonic with electricity."

Last but not least is the official reveal of three bosses - Ninja, Tower and Asura. Ninja has high-speed attacks, can block incoming attacks and strike with shadows of itself. Tower is composed of stacked parts and is weak at the top of its head. And Asura is a large building-like enemy that throws its arms down. We've seen this one in the trailers previously. 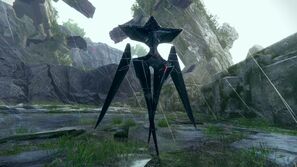 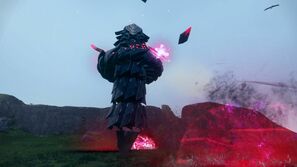 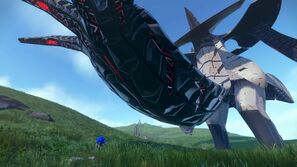 Sonic will make use of the new battle system to take down these enemies. His combat style is this time more "exhilarating and fluid" than ever before - combining dodges, parries, counters and more. He can also unlock battle skills, and there's an "Auto Mode" where various combos can be executed with single button presses.

One other ability explained in this latest update was Cyloop:

"Sonic learns a new ability called “Cyloop,” creating a band of light mirroring Sonic’s tracks. Surround enemies, items and areas to uncover its various effects and unlock the secrets of the Starfall Islands."

What do you think of the latest Sonic Frontiers info update? Are you looking forward to the game's release this holiday? Tell us down below.

When he’s not paying off a loan to Tom Nook, Liam likes to report on the latest Nintendo news and admire his library of video games. His favourite Nintendo character used to be a guitar-playing dog, but nowadays he prefers to hang out with Judd the cat.

I'd rather see a robot fish that jumps from under a bridge or a robot wasp that shoots bullets from it's stinger.

I dunno why but something about that design's giving me Balan Wonderworld vibes. Which isn't exactly a bad thing, the character design in that game's mostly pretty solid.

I must admit the more I see of this the more Curious I get.

@Moistnado You have the classic games for that and ofc Sonic Mania lol.

Infinite is back as a girl.

Sorry, that's the first thing that popped in my mind when I saw Sage's artwork.

If this is switch footage, this looks better than I thought it would. Looks decent, performance-wise.

@RubyCarbuncle a bit more imaginative than a "bubble" or a wheel.

Sage is just a combination of Shadow, Infinite, and...Rosalina

This is giving me major Kingdoms Hearts vibes, just for the fact that each enemy type has a different way to take them down. I know that's not the only game that uses rank-style enemies w/ abilities and weaknesses, but KH was the first to come to mind! Heartless, Nobodies and Unversed

When it says ‘holiday’, is it referring to summer or around Xmas?

I'm getting memories of Cosmo from Sonic X or better yet Void from Sonic Shuffle.

@Moistnado Then go play classic Sonic. Why are you here complaining about a new game doing something new?

How many times do I need to let myself get excited about a new sonic game only to be disappointed? Apparently I haven't hit the limit yet because I cannot wait to pick this up. I so want this to be Sonic's answer to Mario Odyssey or Zelda BOTW.

I know they haven't been received by everyone the same but I think the new enemies seem more grown up than the previous stylings.

They really thought "Let's take Infinite from Sonic Forces and make him a human girl", didn't they?

@HammerGalladeBro Thought of that as well, except I don't find her cringey like Infinite because they didn't try too hard to make her unnecessarily edgy. She's also humanoid in appearance, which is something I don't think we've ever seen from a Sonic antagonist besides Eggman. (Presuming she's a villain, but like...she has to be.)

So yeah, I dig it. I like how Sega is taking a bold new direction--even if the game isn't great, it's nice to see a project with a little more ambition. I never played Forces, but from what I've seen, it seems to be the Kirby Star Allies of the Sonic franchise. Just a very uninspired game that used its predecessors as a crutch and didn't bring anything worthwhile to the table. But I think this game is the Forgotten Land shakeup that Sonic needed.

She looks like Cosmo from Sonic X the new trailer does look better than what IGN showed us still 50/50 i want to see when demo does drop then I'll play it.

@mariomaster96 Exactly what I was thinking!

It is surprising to see so many new types of villains over some of the reoccurring ones in the previous 3D Sonic games.

Now here's hoping these enemies feel distinct to fight against, as opposed to different shapes of target to just home in on and smash without a second thought.

I'm not usually keen on humanesque characters in Sonic games, but I like Sage's design. The other enemy robots are a bit too serious and not cute for my tastes. They certainly don't look like any of the Badnik suits Robotnik traps animals in. But I don't hate them, and I hope the story makes their design justified. We already know that Tails and Amy are in this game, as well as Motobugs in one of the Cyberspace worlds, so there's cute Sonic-like characters in it too.

@RupeeClock Damn it, beaten again! Why can't I go faster?

We already know that Tails and Amy are in this game, as well as Motobugs in one of the Cyberspace worlds, so there's cute Sonic-like characters in it too.

But are Tails and Amy playable characters too or only appear 'cause I would love to be able to play as them too and have always enjoyed playing as Tails more than Sonic (nothing against Sonic😄). Also it would be strange if Knuckles doesn't appear after they just had him in the Sonic the Hedgehog 2 movie.

@Debbiee From what we know so far, (even from translating all the Japanese interviews and features over the last few months... we've known they are in the game for quite some time even though many are reporting this like its "new" information) Amy and Tails are only in the introduction of the story and then Sonic becomes separated from them, and presumably has to either rescue them or get back to them. We've got no evidence yet that they will be playable. The original revel trailer featured Amy's voice actor even though she wasn't on screen so they may well be able to contact him at some point, so I don't think its safe to say they will just dissapear until the end.

However, Sega are clearly being very cagey about slowly releasing information - 90% of what we've seen has been from the first island but we know there are more islands and a lot of what they've said indicates quite a complex story that slowly unveils itself to Sonic and the player at the same time. So my guess is that Amy and Tails will join the story somewhere during gameplay, rather than them just being reunited one the story finishes. Thats just a guess though.

Also, I think its a given that Knuckles will make an appearance in the story too after him being such a huge part of the 2nd movie, and also the recent tv series', and the director of this game saying he was a real fan of the movies and influenced by them. Again, just a guess, but it would be really weird for Amy to be included and not have Knuckles there, its usually the other way round if they are limiting the amount of characters.

My personal feeling going by everything that we've gotten told so far is that plenty of characters we know already (or at least Tails, Knuckles, Amy and presumably Robotnik/Eggman) will appear in the story along the way, but perhaps won't be playable. The information points towards them wanting this to center around Sonic being isolated from his friends and in an unfamiliar environment, and slowly piecing everything together. They said they wanted to have a feeling of confusion, isolation and loneliness, and then slowly tell the story and build things up to being more complete. Sonic is going on a journey of discovery alongside the player. Suddenly switching to control another character would throw that off. Of course, I could be wrong and at some point the other characters become involved and you have to temporarily control them to help Sonic.

Seems somewhat like their trying too hard to copy Breath of the Wild's aesthetics, with the new enemy designs resembling Guardians.

But if that's what it'll take for 3D Sonic games to regain their lost glory, then I say go for it. Still hoping this game will be good.